The Cessna 152
Since its first delivery in 1977, Cessna have built more than 7,500 aircraft. Built to compete with the Piper Tomahawk and Beechcraft Skipper the Cessna 152 became an instant hit with flying schools and clubs. It is worth noting that only 312 Skippers and 2,484 Tomahawks' were made, only a fraction of Cessna's output. This gives the idea that the C152 was a sensation with flying organisations. Sadly, in 1984 Cessna stopped production of the C152 but it remains a favourite of many a pilot.
Today, many C152 are still in service with civilian and military operators. With a cruise speed of 90knots and a ceiling of 14,700ft it is easy to see why the C152 still remains in service 26 years after Cessna stopped production. In 2007 Cessna announced the development on the C162 which is hoped will succeed the C152.
Installation
I downloaded the Carenado C152 from Just Flight, with a download size of 41mb, the download was fast and efficient. Not long ago, Just Flight introduced a new unlock system which makes unlock codes obsolete. All you have to do is enter your account email address and password and you have instantly unlocked the product, a great improvement.
The actual installation itself was just as simple. All you have to do is confirm that the files are going to the correct place in the default FSX folder and click next. After installing the product it's time to have some fun!
Flying the C152
After installing the C152, I found it difficult to locate the aircraft but it is resolved by selecting Carenado in the aircraft manufacturer drop-down menu. Below you can se the variations offered.

Flight dynamics
Carenado say that their C152 was developed with real world data and the help of pilots. And I have to believe they did. The accuracy is second to none and as I am training in the C152 so I understand how it should feel. I used to fly the Just Flight C152 that came with Flying Club X but, for me, that has some performance issues which Carenado's model doesn't. The aircraft even begins to rotate as you approach 55 knots, this is accurate to real world operations.
2D Cockpit
This is the area where Carenado lose marks for me. Instead of using the newer black panel, they have opted for the brown and white panel. Although I don't like the colour, it is redeemed with a nice little feature which if you click on the instruments they become enlarged. This is extremely useful when trying to mimic real word procedures. I found the layout was very accurate to the real C152.

Cessna 152 Publisher: Carenado Review Author:Dominic Smith Suggested Price:$24.95 History The Cessna 152 is a typical two-seater, general aviation aircraft with fixed tricycle gear, used mainly for flight training and personal use. The C152 was produced from 1977 to 1985, and was a revised version of the Cessna 150.

Virtual cockpit
Moving from the 2D panel to the VC, the pure quality is plain to see. Carenado have stayed consistent and modelled the instruments in exactly the same position as the 2D panel. Also, they have added the correct instruments on the right side of the plane. I can't criticise the VC as it is as near the same as it is in the real world aircraft.
Exterior modelling
I have left the best until last here. It is plain to see that Carenado have spent many hours and days modelling the exterior and it has paid off. It is so good even the rivets have been modelled to perfection. The developer has modelled the engine cowling and fuel caps as well which just that bit extra to the realism. Carenado haven't forgot about detailing the major parts like the flaps and elevators as these are also made superbly. I was also pleased to see that the creep mark was also added.

I What I like:
Quality of the exterior model
Quality documentation (which includes Checklist and Performance charts)
Definitiveness of the 2d panel and VC
What could be improved:
Colours of the 2d panel
Overall mark:
It is obvious that Carenado take great care and attention when developing general aviation aircraft and the time they put in allows simmers to enjoy the realism they deliver. I must compliment Carenado for the accuracy they providing with much needed high quality general aviation add-ons.
It has been a pleasure flying and reviewing Carenado's excellent Cessna 152. Overall, a fair mark would be 9/10.
/Edward Longe

Documentation consists of seven items, which include a checklist and reference card. Both of these items are in PDF format and definitely worth looking at. The other documents contained within the aircraft folder cover areas such as recommended settings, copyright, plugin information and credits. It would have been nice to have seen some documentation cover the history of the aircraft, but there was none. This is a shame, as I feel it would added to the enjoyment of the aircraft. 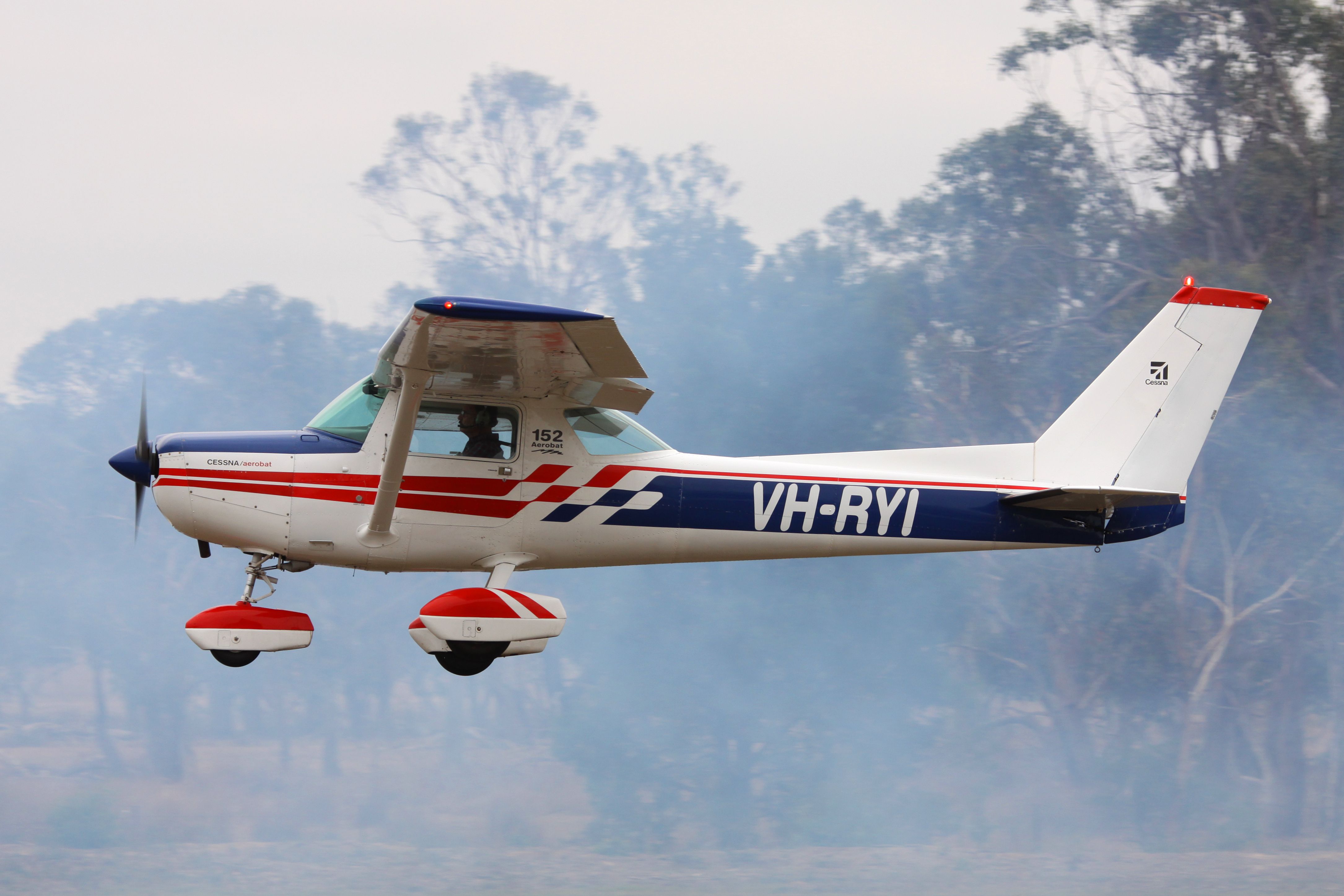 The Cessna 152 is never going to be your most lively steed (think of her more as a willing donkey, rather than an Italian stallion) and if you have your expectations adjusted accordingly, then you won't be disappointed. On the contrary (as mentioned earlier) one of her strengths in some ways is in fact her lack of speed, as she enables you to perform aircraft operations without becoming flustered.

Lining up on the active, and with all necessary communication established, you're ready to take to the air. With throttle fully open and with 10 degrees of flap, you're rolling down the runway. Upon reaching 50 KIAS, you start to lift the nose. At just over 65 KIAS you've left terra ferma and with flaps retracted, you find yourself climbing out at incredible 70 KIAS. The little 110 hp Lycoming engine has a hard time propelling the 800 kg aircraft into the air, so climb speed is adjusted accordingly and settles down to around 650 feet per minute.

At just over 3000 feet, mixture is leaned back and throttle reduced to around 2100 RPM. This is where you can now start to relax (to an extent) and enjoy the view. Visibility is good in the Cessna and the high wing configuration of the Cessna enables you to take in the scenery below without the obstructions a low winged aircraft might present. Manoeuvrability of the little aircraft is, on the whole, very good, with turns being performed in a safe and leisurely manner. At no time did I feel that she was getting ahead of me.

When it comes to power off stalls, you'll find that she'll start to dip her left wing at around 45 KIAS. There is a slight vibration beforehand to give you prior warning of the impending stall, but once the left wing has dipped, increasing the power gently and pulling back on the stick, brings you back to level flight again. It's this kind of forgiving character which favors the Cessna as a learning tool.

With the short flight almost at an end, it's time to head back home. On the approach, set for full flaps and slow to 55 KIAS. Once over the threshold, slowly throttle back whilst maintaining 55 KIAS and flare. If you're lucky (something I rarely am) you should touch down with a minimum of float. Once down, retract the flaps and apply the brakes.

I've owned Carenado's Cessna 152 for just over a year now and have followed the aircraft through its numerous updates, and I must say, that she is a most satisfying and pleasing aircraft to own. I'd even go as far as saying that it's been this aircraft, more than any other, which has taught me the basics of flight and navigation.

She looks good, flies within the numbers and doesn't perform too much of a hit in regards to system resources. If you can run X-Plane 9 or 10 at acceptable frame rates, then the Cessna, won't really change that.

If I could choose things which could be improved on, then I'd say that documentation could have had a bit more weight, especially in regards to the history of he aircraft. Also, for the life of me, I just couldn't get those wheel fairings off. Maybe it was my system, but anyhow, it didn't detract at all from my overall enjoyment of such an incredible detailed and enjoyable aircraft.

If you're looking for an aircraft to learn the basics of flight, tune your skills, or just to fly and enjoy the scenery, then you couldn't go far wrong with the Cessna 152 by Carenado. You never know, she might just turn out to be your new best friend.